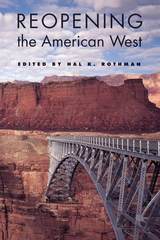 Take a good look at the American West and you'll see that the frontier is undergoing constant changes—not only changes made to the land but also changes in attitudes about the land held by the people who live there.

In this book Mike Davis, Stephen Pyne, William deBuys, Donald Worster, Dan Flores, and others re-examine the relationship between people and the environment in the American West over five hundred years, from the legacy of Coronado's search for the Cities of Gold to the social costs of tourism and gaming inflicted by modern adventurers. By exploring places in the West, aspects of the region's past, and ways of understanding some of its pressing issues, the authors foster a better understanding of how people interact and perceive land.

Reopening the American West takes a fresh approach to the history of the region, examining the premises of earlier scholars as well as those who have redefined the study of the West over the past two decades. It combines provocative essays with insightful analyses to address issues that are representative of the West in the twentieth century—multiculturalism, water issues, resource exploitation—and to reopen the West for all readers interested in new ways of looking at its wide-open spaces.