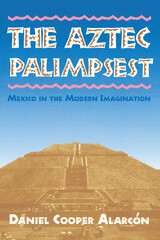 Mexico is more than a country; it is a concept that is the product of a complex network of discourses as disparate as the rhetoric of Chicano nationalism, English-language literature about Mexico, and Mexican tourist propaganda. The idea of "Mexicanness," says Daniel Cooper Alarcón, "has arisen through a process of erasure and superimposition as these discourses have produced contentious and sometimes contradictory descriptions of their subject." By considering Mexicanness as a palimpsest of these competing yet interwoven narratives, Cooper offers a paradigm through which the construction and representation of cultural identity can be studied.

He shows how the Chicano myth of Aztlan was constructed upon earlier Mesoamerican myths, discusses representations of Mexico in texts by nineteenth- and twentieth-century writers, and analyzes the content of tourist literature, thereby revealing the economic, social, and political interests that drive the production of Mexicanness today. This original linking of seemingly incongruous discourses corrects the misconception that Mexicanness is produced only by hegemonic groups. Cooper shows how Mexico has been defined and represented, by both Mexicans and non-Mexicans, as more than a political or geographic entity, and he particularly reveals how Mexicanness has been exploited by Mexicans themselves through the promotion of tourism as a form of neocolonialism.

Cooper's work is valuable both for identifying attempts to revise and control Mexican myth, history, and culture and for defining the intricate relationship between history, historiography, and cultural nationalism. The Aztec Palimpsest extends existing analyses of Mexicanness into new theoretical realms and provides a fresh perspective on the relationship between the United States and Mexico at a time when these two nations are becoming more intimately linked.
AUTHOR BIOGRAPHY
Daniel Cooper Alarcon is a member of the English Department at the University of Arizona. His scholarship has appeared in the journal Aztlán and in the critical anthology Subjects and Citizens, and his short fiction has been published in the anthologies New Chicana/Chicano Writing and New World: Young Latino Writers
TABLE OF CONTENTS