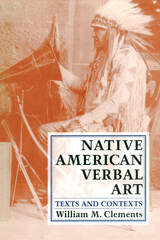 For more than four centuries, Europeans and Euroamericans have been making written records of the spoken words of American Indians. While some commentators have assumed that these records provide absolutely reliable information about the nature of Native American oral expression, even its aesthetic qualities, others have dismissed them as inherently unreliable. In Native American Verbal Art: Texts and Contexts, William Clements offers a comprehensive treatment of the intellectual and cultural constructs that have colored the textualization of Native American verbal art. Clements presents six case studies of important moments, individuals, and movements in this history. He recounts the work of the Jesuits who missionized in New France during the seventeenth and eighteenth centuries and textualized and theorized about the verbal expressions of the Iroquoians and Algonquians to whom they were spreading Christianity.

He examines in depth Henry Timberlake’s 1765 translation of a Cherokee war song that was probably the first printed English rendering of a Native American "poem." He discusses early-nineteenth-century textualizers and translators who saw in Native American verbal art a literature manqué that they could transform into a fully realized literature, with particular attention to the work of Henry Rowe Schoolcraft, an Indian agent and pioneer field collector who developed this approach to its fullest. He discusses the "scientific" textualizers of the late nineteenth century who viewed Native American discourse as a data source for historical, ethnographic, and linguistic information, and he examines the work of Natalie Curtis, whose field research among the Hopis helped to launch a wave of interest in Native Americans and their verbal art that continues to the present.

In addition, Clements addresses theoretical issues in the textualization, translation, and anthologizing of American Indian oral expression. In many cases the past records of Native American expression represent all we have left of an entire verbal heritage; in most cases they are all that we have of a particular heritage at a particular point in history. Covering a broad range of materials and their historical contexts, Native American Verbal Art identifies the agendas that have informed these records and helps the reader to determine what remains useful in them. It will be a welcome addition to the fields of Native American studies and folklore.
AUTHOR BIOGRAPHY
William M. Clements is the author of several books, including Native American Folklore in Nineteenth-Century Periodicals and Italian-American Folklore. He is a professor of English and folklore at Arkansas State University.
REVIEWS
"Provocative, thoughtfully researched essays reconstructing the production and presentation of a wide array of Indian literatures in print. . . . a critical tour de force." —Western Historical Quarterly

TABLE OF CONTENTS
Contents
Acknowledgments
Introduction
One. "Identity" and "Difference" in the Textualization of Zuni Verbal Art
Two. Situations and Performances
Three. "Not So Stupid as They May Have Been Painted": The Jesuits and Native Canadian Verbal Art
Four. "A Sort of Loose Poetry": Henry Timberlake's Cherokee War Song
Five. "Tokens of Literary Faculty": Texts and Contexts in the Early Nineteenth Century
Six. "All We Could Expect from Untutored Savages": Schoolcraft as Textmaker
Seven. "The True Presentiments of the Indian Mind": Linguistic Texts as Data Sources
Eight. Natalie Curtis in Hopiland
Nine. The Anthology as Museum of Verbal Art
Epilogue
Notes
References
Index