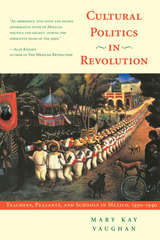 When Indian communities of Chiapas, Mexico, rose in armed rebellion in 1994, they spoke boldly of values, rights, identities, and expectations. Their language struck a chord for most Mexicans, for it was the cultural legacy of the Revolution of 1910. Of all the accomplishments of the Mexican Revolution, its cultural achievements were among its most important. The Revolution's cultural politics accounts in part for the relative political stability Mexico enjoyed from 1940 through 1993 and underlies much of the discourse accompanying the tumultuous transitions in that country today. To show the significance of this facet of the Revolution, Mary Kay Vaughan here analyzes the educational effort of the state during the 1930s, locating it within the broader sweep of Mexican history to illustrate how the government sought to nationalize and modernize rural society. Vaughan focuses on activities in rural schools, where central state policy makers, teachers, and people of the countryside came together to forge a national culture. She examines the cultural politics of schooling in four rural societies in the states of Sonora and Puebla that are representative of the peasant societies in revolutionary Mexico, and she shows how the state's program of socialist education became an arena for intense negotiations over power, culture, knowledge, rights, and gender practices. The real cultural revolution, Vaughan observes, lay not in the state's efforts at socialist education but in the dialogue between state and society that took place around this program. In the 1930s, rural communities carved out a space to preserve their local identities while the state succeeded in nurturing a multi-ethnic nationalism based on its promise of social justice and development. Vaughan brings to her analysis a comparative understanding of peasant politics and educational history, extensive interviews, and a detailed examination of national, regional, and local archives to create an evocative and informative study of Mexican politics and society during modern Mexico's formative years. Cultural Politics in Revolution clearly shows that only by expanding the social arena in which culture was constructed and contested can we understand the Mexican Revolution's real achievements.