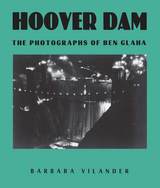 Hoover Dam was constructed during one of the most depressed economic climates in American history, in a remote desert canyon where temperatures ranged from single to triple digits. In order to visually document the project, the Bureau of Reclamation assigned employee Ben Glaha to photograph all aspects of the dam's construction. Glaha's photographs were used in press releases, periodicals, books, pamphlets, and slide shows to demonstrate that the dam was structurally sound and that government funds were being used wisely.

Hoover Dam: The Photographs of Ben Glaha is the first detailed examination of Glaha's images of the project, some of which have never before been published. Glaha photographed every aspect of the construction process—from details of how the dam was assembled to the overall progress as the dam rose from the bottom of the dry riverbed. Glaha not only provided the Bureau with the photographs it required, he also employed his own artistic abilities to produce images of the dam that were exhibited in museums and galleries as works of art. Because Glaha was able to create a selection of Hoover Dam photographs worthy of exhibition, he was unique among government documentary photographers.

Art historian Barbara Vilander's text places Glaha's efforts within the historical context of western landscape exploration and development and reveals how his particular qualifications led to his selection as the project photographer. Vilander then examines the many publications and venues in which the Bureau used Glaha's photographs to create support for the project. She also discusses how Glaha was recognized in his own era as an influential artist and teacher, and compares his work with that of other contemporary landscape photographers addressing western water management.

Glaha's Hoover Dam images were widely published, although in accordance with Bureau policy he was not usually given personal credit and therefore his name remains largely unknown. Vilander's book corrects that oversight by giving Glaha the technical and artistic credit he is due within the context of one of the most ambitious projects in American history.
TABLE OF CONTENTS