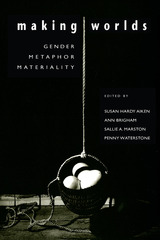 Making Worlds brings together thirty-one distinguished feminist activists, artists, and scholars to address a series of questions that resonate with increasing urgency in our current global environment: How is space imagined, represented, arranged, and distributed? What are the lived consequences of these configurations? And how are these questions affected by gender and other socially constructed categories of "difference"—race, ethnicity, sexuality, class, nationality? How are the symbolic formations of place and space marked by cultural ideologies that carry across into the places and spaces we inhabit, the boundaries and institutions we maintain?

In recent years these questions have occasioned intensifying debates, but they have seldom extended beyond the boundaries of individual academic disciplines or crossed the divide that has traditionally separated the academy from the "outside" world. Making Worlds both questions and traverses those divisions by combining personal essays, activist political rhetoric, oral history, poetry, iconography, and performance art with interdisciplinary academic discourses.

Representing a wide range of perspectives, Making Worlds develops a provocative conversation about gender and spatiality in the interwoven symbolic and material environments we create. The contributors engage such issues as the body as site of symbolic action, fabrication, and desire; the place and play of sexualities; the cultural implications of everyday life—home, travel, work, childbirth, food, disease, and death; technology and mass media; surveillance, confinement, and the law; the dynamics of race and ethnicity; imperialism, oppression, and resistance; the politics of urban spaces; landscape and cultural memory; the experience of time; and the nature of "Nature." For students and scholars in cultural studies, geography, literary criticism, anthropology, history, and women's studies, it offers new ways of thinking about space, place, and the spatial contexts of social thought and action.

Part 5. Sites and Spectacles
Poems from Ocean Power: Poems from the Desert: Ofelia Zepeda
Confinements: The Domestic in the Discourses of Upper-Middle-Class Pregnancy: Helena Michie
Civilization, Barbarism, and Norteña Gardens: Raquel Rubio-Goldsmith
Dancing for Dollars: Lori Scheer
Reflections on Upward Mobility: Performance Spaces, Critical Practice, and the Spectacle of Flight: Mary Russo
Telling Time: Time, Metaphor, Feminism: Judith Roof
AUTHOR BIOGRAPHY
Susan Hardy Aiken is a professor of English at the University of Arizona and author of Isak Dinesen and the Engendering of Narrative. Ann Brigham is an assistant professor of English and Women's Studies at Roosevelt University. Sallie A. Marston is an associate professor of geography and regional development at the University of Arizona and co-author of Places and Regions in Global Context.