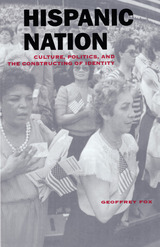 Hispanic Nation: Culture, Politics, and the Constructing of Identity
by Geoffrey Fox
University of Arizona Press, 1997
Paper: 978-0-8165-1799-2
A new ethnic identity is being constructed in the United States: the Hispanic nation. Overcoming age-old racial, regional, and political differences, Americans of Mexican, Puerto Rican, Cuban, and other Spanish-language origins are beginning to imagine themselves as a single ethnic community-which by the turn of the century may become the United States' largest and most influential minority.
AUTHOR BIOGRAPHY
Geoffrey Fox has written two books for young readers, The Land and People of Venezuela and The Land and People of Argentina, as well as Welcome to my Contri, a collection of stories on relations between Anglo and Hispanic Americans. He lives near Detroit.