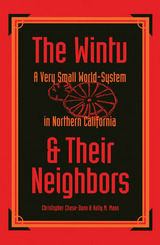 On the cutting edge of world-systems theory comes The Wintu and Their Neighbors, the first case study to compare and contrast systematically an indigenous Native American society with the modern world at large. Using an interdisciplinary approach that combines sociology, anthropology, political science, geography, and history, Christopher Chase-Dunn and Kelly M. Mann have scoured the archaeological record of the Wintu, an aboriginal people without agriculture, metallurgy, or class structure who lived in the wooded valleys and hills of northern California. By studying the household composition, kinship, and trade relations of the Wintu, they call into question some of the basic assumptions of prior sociological theory and analysis.

Chase-Dunn and Mann argue that Immanuel Wallerstein's world-systems perspective, originally applied only to the study of modern capitalistic societies, can also be applied to the study of the social, economic, and political relationships in small stateless societies. They contend that, despite the fact that the Wintu appear on the surface to have been a household-based society, this indigenous group was in fact involved in a myriad of networks of interaction, which resulted in intermarriage and which extended for many miles around the region. These networks, which were not based on the economic dominance of one society over another—a concept fundamental to Wallerstein's world-systems theory—led to the eventual expansion of the Wintu as a cultural group.

Thus, despite the fact that the Wintu did not behave like a modern society—lacking wealth accumulation, class distinctions, and cultural dominance—Chase-Dunn and Mann insist that the Wintu were involved in a world-system and argue, therefore, that the concept of the "minisystem" should be discarded. They urge other scholars to employ this comparative world-systems perspective in their research on stateless societies.
AUTHOR BIOGRAPHY
Christopher Chase-Dunn is a professor of sociology at Johns Hopkins University. Kelly M. Mann is a J.D. candidate at the Cornell Law School.
REVIEWS
"This is a unique literary production: an outline of a complete world-system in a single text. . . . undoubtedly a major contribution to understanding premodern societies by combining a particular theoretical perspective with a comprehensive use of evidence on one 'very small world-system.' It is fascinating both in the details harnessed for its theoretical arguments, and the synthesis which produces a unique text." —Progress in Human Geography