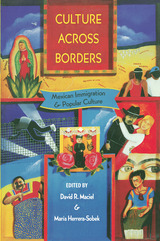 For as long as Mexicans have emigrated to the United States they have responded creatively to the challenges of making a new home. But although historical, sociological, and other aspects of Mexican immigration have been widely studied, its cultural and artistic manifestations have been largely overlooked by scholars—even though Mexico has produced the greatest number of cultural works inspired by the immigration process. And recently Chicana/o artists have addressed immigration as a central theme in their cultural productions and motifs. Culture across Borders is the first and only book-length study to analyze a wide range of cultural manifestations of the immigration experience, including art, literature, cinema, corridos, and humor. It shows how Mexican immigrants have been depicted in popular culture both in Mexico and the United States—and how Mexican and Chicano/Chicana artists, intellectuals, and others have used artistic means to protest the unjust treatment of immigrants by U.S. authorities. Established and upcoming scholars from both sides of the border contribute their expertise in art history, literary criticism, history, cultural studies, and other fields, capturing the many facets of the immigrant experience in popular culture. Topics include the difference between Chicano/a and Mexican representation of immigration; how films dealing with immigrants are treated differently by Mexican, Chicano, and Hollywood producers; the rich literary and artistic production on immigration themes; and the significance of immigration in Chicano jokes. As a first step in addressing the cultural dimensions of Mexican immigration to the United States, this book captures how the immigration process has inspired powerful creative responses on both sides of the border.
AUTHOR BIOGRAPHY
David R. Maciel is a professor of history at the University of New Mexico whose books include Aztlán: Historia del pueblo chicano and El Norte: The U.S.-Mexican Border in Contemporary Cinema. María Herrera-Sobek is the Luis Leal Endowed Chair and Professor of Chicano/Chicana Studies at the University of California, Santa Barbara.
TABLE OF CONTENTS