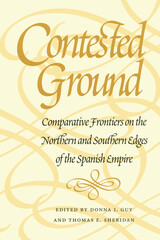 The Spanish empire in the Americas spanned two continents and a vast diversity of peoples and landscapes. Yet intriguing parallels characterized conquest, colonization, and indigenous resistance along its northern and southern frontiers, from the role played by Jesuit missions in the subjugation of native peoples to the emergence of livestock industries, with their attendant cowboys and gauchos and threats of Indian raids. In this book, nine historians, three anthropologists, and one sociologist compare and contrast these fringes of New Spain between 1500 and 1880, showing that in each region the frontier represented contested ground where different cultures and polities clashed in ways heretofore little understood. The contributors reveal similarities in Indian-white relations, military policy, economic development, and social structure; and they show differences in instances such as the emergence of a major urban center in the south and the activities of rival powers. The authors also show how ecological and historical differences between the northern and southern frontiers produced intellectual differences as well. In North America, the frontier came to be viewed as a land of opportunity and a crucible of democracy; in the south, it was considered a spawning ground of barbarism and despotism. By exploring issues of ethnicity and gender as well as the different facets of indigenous resistance, both violent and nonviolent, these essays point up both the vitality and the volatility of the frontier as a place where power was constantly being contested and negotiated.
AUTHOR BIOGRAPHY
Donna J. Guy is a professor of history at the University of Arizona. Author of Sex and Danger in Buenos Aires: Prostitution, Family, and Nation in Argentina, she has written three books and more than 25 articles on Argentine history. Thomas E. Sheridan holds a joint appointment as professor of Anthropology at the Southwest Center and the Department of Anthropology at the University of Arizona. He has authored or co-edited eleven other books.