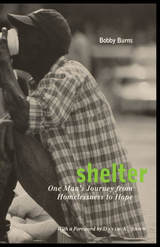 Bobby Burns arrived in Tucson, Arizona, with a few dollars in his pocket and no place to live. Without family, without a job, he had nowhere to go but a homeless shelter. How did a college graduate find himself so close to life on the streets? In a voice that is startling for its simplicity and utter honesty, Burns tells the story of how he slipped into homelessness, how he learned what it means to live in a place where nobody will notice if you disappear, and how he emerged to tell his story. Bobby's diary of 41 days without a home brings readers into the world of a homeless shelter.

Shelter is filled with the sights and sounds of homelessness. Shelter life is patterned by meals provided by church volunteers, lines for soap and clean towels, the repeated meticulous washing of hands by an obsessive-compulsive resident, the rare pleasure of a fried chicken dinner, the illicit smell of marijuana within the shelter. Burns witnesses the residents' struggles with drugs, alcohol, and disability, and he wonders daily whether he will have the courage to emerge from this life. Bobby's diary expresses the full range of emotions of a homeless person: anger, self-pity, pride, humility, shame, depression, and optimism. These are not contradictions; taken together they represent the real feelings provoked by homelessness.

But with rare inner courage, Bobby stokes the fires of hope within himself, marking the days in his journal to keep himself from sliding deeper into a spiral of despair. Bobby confronts his own stereotypes about the homeless and learns firsthand what it means to struggle daily for survival and for dignity. He learns greater courage and he learns greater kindness. He is given food and a bed for 41 days, but he finds shelter on his own, deep within himself.
AUTHOR BIOGRAPHY
Bobby Burns writes for the Arizona Informant Newspaper, a weekly African American newspaper, and is a former columnist with the Tucson Citizen newspaper. He also co-hosts the On the Bookshelf radio show about writers. He earned an M.A. from Northern Arizona University and a B.A. degree from Arizona State University. He recently celebrated 14 years clean and sober.
TABLE OF CONTENTS
Blank Page
Blank Page
Contents
Foreword (David A. Snow)
Acknowledgements
Shelter Diary
Epilogue