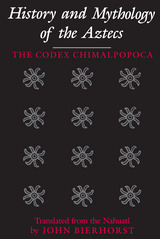 One of the great documents of colonial Mexico, the Codex Chimalpopoca chronicles the rise of Aztec civilization and preserves the mythology on which it was based. Its two complementary texts, Annals of Cuauhtitlan and Legend of the Suns, record the pre-Cortésian history of the Valley of Mexico together with firsthand versions of that region's myths.

Of particular interest are the stories of the hero-god Quetzalcoatl, for which the Chimalpopoca is the premier source. John Bierhorst's work is the first major scholarship on the Codex Chimalpopoca in more than forty years. His is the first edition in English and the first in any language to include the complete text of the Legend of the Suns. The precise, readable translation not only contributes to the study of Aztec history and literature but also makes the codex an indispensable reference for Aztec cultural topics, including land tenure, statecraft, the role of women, the tribute system, warfare, and human sacrifice.
AUTHOR BIOGRAPHY
John Bierhorst is also the editor-translator of Cantares Mexicanos: Songs of the Aztecs and the author of a Nahuatl-English dictionary. Currently he is at work on a bilingual edition of the manuscript Romances de los senores de la Nueva Espana, a sixteenth-century compilation of Aztec song texts.
REVIEWS
"Increases our chances of understanding the perspectives and procedures of native Mesoamerican prehistory." —Bulletin of Latin American Research"It is a careful scholarly translation which alerts the reader to differences of opinion as to translation interpretations and paleographic readings of the documents by previous scholars."—Nahua Newsletter