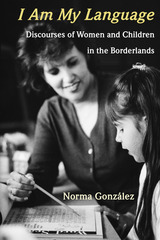 “I am my language,” says the poet Gloria Anzaldúa, because language is at the heart of who we are. But what happens when a person has more than one language? Is there an overlay of language on identity, and do we shift identities as we shift languages? More important, what identities do children construct for themselves when they use different languages in particular ways?

In this book, Norma González uses language as a window on the multiple levels of identity construction in children—as well as on the complexities of life in the borderlands—to explore language practices and discourse patterns of Mexican-origin mothers and the language socialization of their children. She shows how the unique discourses that result from the interplay of two cultures shape perceptions of self and community, and how they influence the ways in which children learn and families engage with their children’s schools.

González demonstrates that the physical presence of the border profoundly affects the practices and ideologies of Mexican-origin women and children. She then argues that language and cultural background should be used as a basis for building academic competencies, and she demonstrates why the evocative/emotive dimension of language should play a major part in studies of discourse, language socialization, and language ideology.

Drawing on women’s own narratives of their experiences as both mothers and borderland residents, I Am My Language is firmly rooted in the words of common people in their everyday lives. It combines personal odyssey with cutting-edge ethnographic research, allowing us to hear voices that have been muted in the academic and public policy discussions of “what it means to be Latina/o” and showing us new ways to connect language to complex issues of education, political economy, and social identity.

AUTHOR BIOGRAPHY
Norma González is a research anthropologist at the Bureau of Applied Research in Anthropology, University of Arizona. Her writings have appeared in such publications as Anthropology and Education Quarterly, Education and Urban Society, and Journal of Applied Behavioral Sciences.
TABLE OF CONTENTS

3. When the Facts Won’t Stay Put:
Finding Emotion in All the Wrong Places

4. The Hearts of the Children: Emotion, Language, and Identity
Emotion as Examinable
Pushing Emotion beyond Sociocultural Competence
The Emotion of Linguistic Input
The Emotion of Minority Status
Disambiguation and the Construction of Selfhood
A Metaphor for Language Use: The Dialogical Staircase, an Interactional Double Helix
Disambiguation and Self-Authorship
Diacritica
The Tucson International Mariachi Conference: Musical Discourse and Performed Identities
‘‘Structures of Feeling’’

7. Household Language Use: The Push and the Pull
Centripetal and Centrifugal Forces in Language Use
Household Discourse
Breakfast Table Conversation
The Bent Glasses Story
The Gómez Family
The Ties That Bind
Television and Telenovelas
Homework and Language