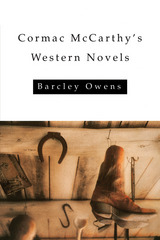 In the continuing redefinition of the American West, few recent writers have left a mark as indelible as Cormac McCarthy. A favorite subject of critics and fans alike despite—or perhaps because of—his avoidance of public appearances, the man is known solely through his writing. Thanks to his early work, he is most often associated with a bleak vision of humanity grounded in a belief in man's primordial aggressiveness.

McCarthy scholar Barcley Owens has written the first book to concentrate exclusively on McCarthy's acclaimed western novels: Blood Meridian, National Book Award winner All the Pretty Horses, The Crossing, and Cities of the Plain. In a thought-provoking analysis, he explores the differences between Blood Meridian and the Border Trilogy novels and shows how those differences reflect changing conditions in contemporary American culture.

Owens captures both Blood Meridian's wanton violence and the Border Trilogy's fond remembrance of the Old West. He shows how this dramatic shift from atavistic brutality to nostalgic Americana suggests that McCarthy has finally given his readers what they most want—the stuff of their mythic dreams.

Owens's study is both an incisive look at one of our most important and demanding authors and a penetrating analysis of violence and myth in American culture. Fans of McCarthy's work will find much to consider for ongoing discussions of this influential body of work.