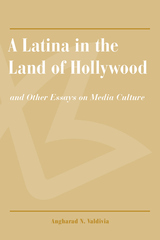 From ads for Victoria's Secret to the character roles of Rosie Perez, the mass media have been defining race and femininity. In this diverse set of essays, Angharad N. Valdivia breaks theoretical and methodological boundaries by exploring the relationship of the media to various audiences. Throughout A Latina in the Land of Hollywood we are challenged to think differently about the media messages we often unconsciously consume, such as the popular representations of certain Latina cultural icons. Valdivia shows how reporters focus on Guatemalan activist Rigoberta Menchú's big smile, Brazilian media magnate Xuxa's blonde hair, and Puerto Rican actress Rosie Perez's high-pitched voice, never quite creating a comprehensive portrayal of these women. In her discussion of lingerie catalogs, Valdivia uncovers a similarly skewed depiction. The lush, high-class bedrooms of Victoria's Secret differ as much from the earthy, spare world of Frederick's of Hollywood as the types, sizes, and uses of the lingerie that the two companies sell. Valdivia takes a look at family films, arguing that single mothers are almost always portrayed as either trampy floozies or sexless, hapless women, whereas single dads fare much better. Whether examining one teenager's likes and dislikes or considering single parenthood in family films, Valdivia investigates how popular culture has become the arena in which we struggle to know ourselves and to make ourselves known. She calls for scholars to move beyond investigating implicit themes in films and media to studying the ways that audiences of different colors, ages, genders, and sexual preferences might understand or misunderstand such cultural messages. A Latina in the Land of Hollywood aims to explode traditional discussions of media and popular culture. It is a must-read for anyone interested in popular culture, television, and film.
REVIEWS
"Her eye examines such women often in the media eye as Rigoberta Menchú, Xuxa, and Rosie Pérez. But rather than an expected academic examination of the topic, Valdivia makes her theories personal, intimate, and engaging." —Hispanic
— -