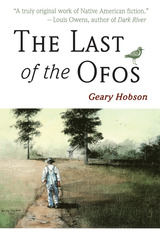 Thomas Darko is a Mohican for the twentieth century, the last surviving member of the tiny Mosopelea Tribe of the Mississippi Delta, called Ofos by outsiders. Never numbering more than a few hundred people in recorded history, his kinsmen have died away until Thomas comes to think of himself as "a nation of one." Now an old man in the waning years of the century, Thomas tells the story of his rough-and-tumble life--one which saw many of the changes that Indian people have faced in modern America—and he emerges as one of the most endearing characters in contemporary Native American literature.

In this subtle but inventive novel, presented as Thomas's memoirs, Geary Hobson offers us a glimpse into a life filled with simple joys and sorrows. In relating his Louisiana childhood, Thomas recalls not just school-learning but being taught Indian ways by the small Ofo community. He tells of his life as a roustabout in the oil fields, of his courtship of the rambunctious Sally Fachette, and of his career as a bootlegger, which landed him in prison. We share Thomas's wartime stint with the Marines—where "for the first time in my life I was treated like a equal"—and his life as a farm laborer and a Hollywood extra portraying warbonneted Cheyennes. Then in his later years, when he truly has become the last of his kind, we find Thomas recruited by an anthropologist from the Smithsonian Institution to preserve his people's culture. In Washington, he is exposed to the vagaries of Indian policy and the emerging Native American movement.

Throughout Thomas's story, readers are introduced to a wide-ranging cast of characters, from the outlaws Bonnie and Clyde to a fellow Marine who is wary of Indians, to an uppity anthropologist who doesn't consider Thomas "expert" enough to handle an Ofo flute. Always poor in material wealth but rich in heritage, Thomas Darko is a Native American Everyman whose identity is shaped by family and homeland. His "autobiography" paints a realistic portrait of an Indian confronting the obstacles in his life and the dilemmas of his age as his story reveals the painful legacy of being the last of one's kind.
AUTHOR BIOGRAPHY
Geary Hobson is Cherokee-Quapaw/Chickasaw. He grew up in southern Arkansas, north of where the Ofos once lived and where their descendants still reside among the Tunica-Biloxi tribe of Louisiana. Currently Associate Professor of English at the University of Oklahoma, he is the author of Deer Hunting and Other Poems and the editor of The Remembered Earth: An Anthology of Contemporary Native American Literature.