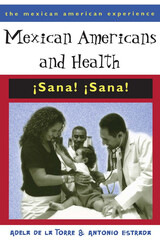 Mexican Americans and Health: ¡Sana! ¡Sana!
by Adela de la Torre and Antonio Estrada
University of Arizona Press, 2001
Paper: 978-0-8165-1976-7
By the middle of the twenty-first century, one out of every six Americans will be of Mexican descent; and as health care becomes of increasing concern to all Americans, the particular needs of Mexican Americans will have to be more thoroughly addressed. Mexican Americans and Health explains how the health of Mexican-origin people is often related to sociodemographic conditions and genetic factors, while historical and political factors influence how Mexican Americans enter the health care system and how they are treated once they access it. It considers such issues as occupational hazards for Mexican-origin agricultural workers—including pesticide poisoning, heat-related conditions, and musculoskeletal disorders—and women's health concerns, such as prenatal care, preventable cancers, and domestic violence. The authors clearly discuss the health status of Mexican Americans relative to the rest of the U.S. population, interweaving voices of everyday people to explain how today's most pressing health issues have special relevance to the Mexican American community:
- how values such as machismo, familismo, and marianismo influence care-seeking decisions and treatment of illness;
- how factors such as cultural values, socioeconomic status, peer pressure, and family concerns can contribute to substance abuse;
- how cultural attitudes toward sex can heighten the risk of AIDS—and how approaches to AIDS prevention and education need to reflect core cultural values such as familismo, respeto, and confianza. The book also addresses concerns of Mexican Americans regarding the health care system. These include not only access to care and to health insurance but also the shortage of bilingual and bicultural health care professionals. This coverage stresses not only the importance of linguistic competency but also the need to understand folklore illnesses, herbal remedies, and spiritual practices that can delay the treatment of illness and either complement or compromise treatment. Of all the issues that face the contemporary Mexican American community, none is as important to its very survival as health and health care. This timely book gives readers a broad understanding of these complex issues and points the way toward a healthier future for all people of Mexican origin. Mexican Americans and Health and Chicano Popular Culture are the first volumes in the series The Mexican American Experience, a cluster of modular texts designed to provide greater flexibility in undergraduate education. Each book deals with a single topic concerning the Mexican American population. Instructors can create a semester-length course from any combination of volumes, or may choose to use one or two volumes to complement other texts.
AUTHOR BIOGRAPHY
Adela de la Torre is Director of Chicana/Chicano Studies at the University of California--Davis. Antonio Estrada is an associate professor of Public Health and Mexican American Studies at the University of Arizona and has been chief investigator in several National Institute on Drug Abuse studies in AIDS research.
TABLE OF CONTENTS
Contents
List of Figures
List of Tables
Acronyms Used in the Text
Acknowledgments
Overview of Health Care Issues for People of Mexican Origin
Interviewee Personal Profiles
Notes
Chapter 1. "It was just an ideal location": An Introduction to the Mexican-Origin Population
Political-Geographic Concentration of the Mexican-Origin Population
Historical Concentration of the Mexican-Origin Population
Langauge Status
Educational Level
Occupational Location
Concluding Thoughts
The Historical Context of Health and Disease
The Sociocultural Basis of Health and Disease
Health Promotion and Disease Prevention in the Mexican American Community
The Health Status of Mexican American Subgroups
The Mexican American Morbidity and Mortality Paradox
Concluding Thoughts
Chapter 3. "One starts with marijuana . . . ": Understanding Substance Abuse and AIDS
Prevalence of Drug Use among Mexican American Adolescents and Adults
Causal Factors in Substance Use
Adverse Health Consequences of Drug Use
Prevention Issues among Hispanic Youth and Adolescents
Concluding Thoughts
Chapter 4. "Treated like second-class citizens": Health Care Access
What Is Health Care Access?
Financial Access to Care: A Crisis for Mexican-Origin Patients
Risk Factors That Influence the Health Insurance Coverage of the Mexican-Origin Population
The Role of Minority Health Care Professionals in Access to Care
Concluding Thoughts
Linguistic Competency: A Siginificant Component of Cultural Competency
The Impact of Mexican Folklore, Language, and Health
Cultural Competency: Implications for the Mexican-Origin Population
Understanding the Role of Gender and Cultural Competency
Implementation of Cultural Competency: Implications for the Mexican-Origin Population
A Patient's Guife for Assessing the Cultural Competency of a Health Care Provider
Beyond Cultural Competency: Some Final Thoughts
Chapter 6. "This is about heling, about people getting better prevention": Future Trends in Mexican American Health
Mexican American Health Policy in the Twenty-First Century
Glossary
Bibliography
Index