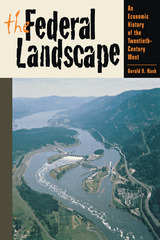 The vastness of the American West is apparent to anyone who travels through it, but what may not be immediately obvious is the extent to which the landscape has been shaped by the U.S. government. Water development projects, military bases, and Indian reservations may interrupt the wilderness vistas, but these are only an indication of the extent to which the West has become a federal landscape.

Historian Gerald D. Nash has written the first account of the epic growth of the economy of the American West during the twentieth century, showing how national interests shaped the West over the course of the past hundred years. In a book written for a broad readership, he tells the story of how America’s hinterland became the most dynamic and rapidly growing part of the country.

The Federal Landscape relates how in the nineteenth century the West was largely developed by individual enterprise but how in the twentieth Washington, D.C., became the central player in shaping the region. Nash traces the development of this process during the Progressive Era, World War I, the New Deal, World War II, the affluent postwar years, and the cold-war economy of the 1950s. He analyzes the growth of western cities and the emergence of environmental issues in the 1960s, the growth of a vibrant Mexican-U.S. border economy, and the impact of large-scale immigration from Latin America and Asia at century’s end.

Although specialists have studied many particular facets of western growth, Nash has written the only book to provide a much-needed overview of the subject. By addressing subjects as diverse as public policy, economic development, environmental and urban issues, and questions of race, class, and gender, he puts the entire federal landscape in perspective and shows how the West was really won.
AUTHOR BIOGRAPHY
Gerald D. Nash is Distinguished Professor of History at the University of New Mexico. Among his other books are The American West in the Twentieth Century and The American West Transformed: The Impact of World War II.