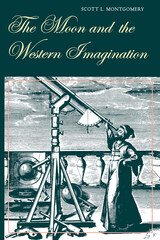 The Moon is at once a face with a thousand expressions and the archetypal planet. Throughout history it has been gazed upon by people of every culture in every walk of life. From early perceptions of the Moon as an abode of divine forces, humanity has in turn accepted the mathematized Moon of the Greeks, the naturalistic lunar portrait of Jan van Eyck, and the telescopic view of Galileo.

Scott Montgomery has produced a richly detailed analysis of how the Moon has been visualized in Western culture through the ages, revealing the faces it has presented to philosophers, writers, artists, and scientists for nearly three millennia. To do this, he has drawn on a wide array of sources that illustrate mankind's changing concept of the nature and significance of heavenly bodies from classical antiquity to the dawn of modern science.

Montgomery especially focuses on the seventeenth century, when the Moon was first mapped and its features named. From literary explorations such as Francis Godwin's Man in the Moone and Cyrano de Bergerac's L'autre monde to Michael Van Langren's textual lunar map and Giambattista Riccioli's Almagestum novum, he shows how Renaissance man was moved by the lunar orb, how he battled to claim its surface, and how he in turn elevated the Moon to a new level in human awareness. The effect on human imagination has been cumulative: our idea of the Moon, and therefore the planets, is multilayered and complex, having been enriched by associations played out in increasingly complicated harmonies over time. We have shifted the way we think about the lunar face from a "perfect" body to an earthlike one, with corresponding changes in verbal and visual expression.

Ultimately, Montgomery suggests, our concept of the Moon has never wandered too far from the world we know best—the Earth itself. And when we finally establish lunar bases and take up some form of residence on the Moon's surface, we will not be conquering a New World, fresh and mostly unknown, but a much older one, ripe with history.
AUTHOR BIOGRAPHY
Scott L. Montgomery is a geologist and independent scholar who has written widely on various topics related to the history of science, science and art, language studies, education, and cultural criticism. His most recent books include The Scientific Voice and Movements of Knowledge: The Role of Translation in the Making of Modern Science. He lives in Seattle.