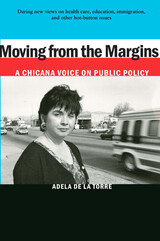 Moving from the Margins: A Chicana Voice on Public Policy
by Adela de la Torre
University of Arizona Press, 2002
Paper: 978-0-8165-1991-0
Immigration reform. Bilingual education. Affirmative action. Such issues trigger knee-jerk reactions from many people, and in California those reactions are likely to fall along strict ethnic lines. A white majority has long called the shots in voter initiatives, but with Mexican Americans becoming the majority population in southern California, their views on these matters can no longer be ignored. In Moving from the Margins, an outspoken member of the Mexican American community explores issues that have molded politics over the past decade in a state where division seems more common than unity.

Addressing immigration, education, health care, and economic and political concerns, Adela de la Torre provides a distinctly Chicana perspective that often differs from that of mainstream readers and voters. Drawn from the author's syndicated column in the Los Angeles Times along with writings from other publications, Moving from the Margins includes incisive and often provocative commentaries that provide insights into the roots of ethnic tensions in the Golden State.

The book also includes readers' reactions to the articles, creating a dialogue of ideas while confronting fears of what many Americans view as an alien culture. Whether addressing entitlements granted to noncitizens, the future of public schools, or access to health care, de la Torre challenges readers to move beyond their own frame of reference and consider new points of view. The issues she faces have shaped today's California—and they also lie at the heart of urban public policy in America for the twenty-first century.
AUTHOR BIOGRAPHY
Adela de la Torre is Director of Chicana/Chicano Studies at the University of California--Davis.