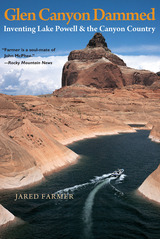 Growth is a major issue in the contemporary American West, especially as more and more towns and states turn to tourism to spark their economies. But growth has a flip side—loss—about which we seldom think until something is irrevocably gone. Where once was Glen Canyon, with its maze of side-canyons leading to the Colorado River, now is Lake Powell, second largest reservoir in America, attracting some three million visitors a year. Many who come here think they have found paradise, and for good reason: it's beautiful. However, the loss of Glen Canyon was monumental—to many, a notorious event that remains unresolved.

Focusing on the saddening, maddening example of Glen Canyon, Jared Farmer traces the history of exploration and development in the Four Corners region, discusses the role of tourism in changing the face of the West, and shows how the "invention" of Lake Powell has served multiple needs. He also seeks to identify the point at which change becomes loss: How do people deal with losing places they love? How are we to remember or restore lost places? By presenting Glen Canyon as a historical case study in exploitation, Farmer offers a cautionary tale for the future of this spectacular region. In assessing the necessity and impact of tourism, he questions whether merely visiting such places is really good for people's relationships with each other and with the land, suggesting a new ethic whereby westerners learn to value what remains of their environment. Glen Canyon Dammed was written so that the canyon country's perennial visitors might better understand the history of the region, its legacy of change, and their complicity in both. A sobering book that recalls lost beauty, it also speaks eloquently for the beauty that may still be saved.
AUTHOR BIOGRAPHY
Jared Farmer's writing has appeared in the Journal of the Southwest, the Utah Historical Quarterly, and the Western Historical Quarterly. He lives in Provo, Utah.