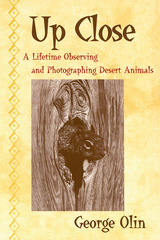 BUY
Up Close: A Lifetime Observing and Photographing Desert Animals
by George Olin
University of Arizona Press, 2000
Cloth: 978-0-8165-2003-9
Paper: 978-0-8165-2004-6
George Olin has gained a wide reputation as a keen observer of nature. In books such as Mammals of the Southwestern Deserts and House in the Sun, his writing and photography have enchanted those who want to know more about the desert and its animals—even people who already live there. In this charming memoir, Olin combines personal and natural history to recount his long fascination with animals. In addition to painting a vivid picture of his nomadic life, he describes the ingenious methods he devised to observe desert creatures and build their trust—and the lessons they taught him in return. Olin takes readers back to 1951, when he and his wife, Irene, were hired as fire lookouts in Arizona's Huachuca Mountains. There, where golden eagles soared and rock squirrels scampered, they befriended a wide variety of animals, from skunks to coatis, and knew they had found satisfaction. The following year they participated in the founding of the Arizona-Sonora Desert Museum in Tucson and were in on its construction from the ground up. As a ranger and later the park naturalist at Saguaro National Monument, Olin became acquainted with more of the desert's creatures, sharpened his photographic skills, and even studied pollination of saguaro cactus by bats and other creatures. Following eight years spent working for the Park Service in the East, the Olins returned to their beloved desert as retirees. There George embarked upon a night photography project, following foxes, skunks, raccoons, and ringtail cats on their nocturnal rounds, and later extending his study to kit foxes and kangaroo rats. Up Close contains a wealth of information about what he learned on those outings, and his engaging tales of personal encounters with these and other denizens of the desert will make even Gila monsters, wood rats, and scorpions seem less threatening for readers who flinch at the very thought of them. Up Close is a warm and enjoyable book, chock full of Olin's charming photographs, that makes the desert and its creatures come alive. It will delight all who love the Southwest and instill a sense of wonder in anyone fascinated by the natural world.
AUTHOR BIOGRAPHY
George Olin was born in Luverne, Minnesota, in 1907 and has spent most of his life in the outdoors. Since 1947, he has lived all but eight years in the southwestern deserts.