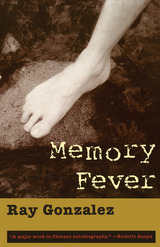 Memory Fever
by Ray Gonzalez
University of Arizona Press, 1999
Paper: 978-0-8165-2011-4
For poet Ray Gonzalez, growing up in El Paso during the 1960s was a time of loneliness and vulnerability. He encountered discrimination in high school not only for being Latino but also for being a non-athlete in a school where sports were important. Like many young people, he found diversion in music; unlike most, he found solace in the desert. In these vignettes, Gonzalez shares memories of boyhood that tell how he discovered the natural world and his creative spirit.

Through 29 storylike essays, Gonzalez takes readers into the heart of the desert and the soul of a developing poet. He introduces us to the people who shaped his life. We learn of his father's difficulties with running a pool hall and of his grandmother's steadfast religious faith. We meet sinister Texas Rangers, hallucinatory poets, illegal aliens, and racist high school jocks. His vivid recollections embrace lizard hunts and rattlesnake dreams, rock music and menudo making—all in stories that convey the pains and joys of growing up on the border. As Gonzalez leads us through his desert of hope and vision, we come to recognize the humor and sadness that permeate this special place.
AUTHOR BIOGRAPHY
Ray Gonzalez is a professor of literature at the University of Minnesota, he is the author of 14 books and has also edited more than a dozen anthologies of poetry and fiction and is the recipient of the Carr P. Collins/Texas Institute of Letters Award, the PEN/Oakland Josephine Miles Book Award, the Western Heritage Award, the Latino Heritage Award, and the Minnesota Book Award.