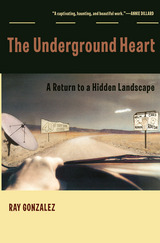 Returning home after a long absence is not always easy. For Ray Gonzalez, it is more than a visit; it is a journey to the underground heart. He has lived in other parts of the country for more than twenty years, but this award-winning poet now returns to the desert Southwest—a native son playing tourist—in order to unearth the hidden landscapes of family and race.

As Gonzalez drives the highways of New Mexico and west Texas, he shows us a border culture rejuvenated by tourist and trade dollars, one that will surprise readers for whom the border means only illegal immigration, NAFTA, and the drug trade. Played out against a soundtrack of the Allman Brothers and The Doors, The Underground Heart takes readers on a trip through a seemingly barren landscape that teems with life and stories. Gonzalez witnesses Minnesotans experiencing culture shock while attending a college football game in El Paso; he finds a proliferation of Pancho Villa death masks housed at different museums; he revisits Carlsbad Caverns, discovering unsuspected beauty beneath the desert's desolation; and he takes us shopping at El Mercado—where tourists can buy everything from black velvet paintings of Elvis (or Jesus, or JFK) to Mexican flag underwear.

From "nuclear tourism" in New Mexico to "heritage tourism" in the restored missions of San Antonio, Gonzalez goes behind the slogans of The Land of Enchantment and The Lone Star State to uncover a totally different Southwest. Here are tourist centers that give a distorted view of southwestern life to outsiders, who leave their dollars in museum gift shops and go home weighed down with pounds of Indian jewelry around their necks. Here border history is the story of one culture overlaid on another, re-forming itself into a whole new civilization on the banks of the Rio Grande.

The Underground Heart is a book brimming with subtle ironies and insights both quiet and complex—one which recognizes that sometimes one must go away and grow older to finally recognize home as a life-giving, spiritually sustaining place. As Gonzalez rediscovers the land of his past, he comes to understand the hyper, bilingual atmosphere of its future. And in the Southwest he describes, readers may catch a glimpse of their own hidden landscapes of home.
AUTHOR BIOGRAPHY
Ray Gonzalez is a professor of literature at the University of Minnesota, he is the author of 14 books and has also edited more than a dozen anthologies of poetry and fiction and is the recipient of the Carr P. Collins/Texas Institute of Letters Award, the PEN/Oakland Josephine Miles Book Award, the Western Heritage Award, the Latino Heritage Award, and the Minnesota Book Award.