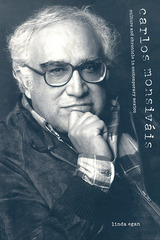 One of Mexico’s foremost social and political chroniclers and its most celebrated cultural critic, Carlos Monsiváis has read the pulse of his country over the past half century. The author of five collections of literary journalism pieces called crónicas, he is perhaps best known for his analytic and often satirical descriptions of Mexico City’s popular culture.

This comprehensive study of Monsiváis’s crónicas is the first book to offer an analysis of these works and to place Monsiváis’s work within a theoretical framework that recognizes the importance of his vision of Mexican culture. Linda Egan examines his ideology in relation to theoretical postures in Latin America, the United States, and Europe to cast Monsiváis as both a heterodox pioneer and a mainstream spokesman. She then explores the poetics of the contemporary chronicle in Mexico, reviewing the genre’s history and its relation to other narrative forms. Finally, she focuses on the canonical status of Monsiváis’s work, devoting a chapter to each of his five principal collections.

Egan argues that the five books that are the focus of her study tell a story of ever-renewing suspense: we cannot know “the end” until Monsiváis is through constructing his literary project. Despite this, she observes, his work between 1970 and 1995 documents important discoveries in his search for causes, effects, and deconstructions of historical obstacles to Mexico’s passage into modernity.

While anthropologists and historians continue to introduce new paradigms for the study of Mexico’s cultural space, Egan’s book provides a reflexive twist by examining the work of one of the thinkers who first inspired such a critical movement. More than an appraisal of Monsiváis, it offers a valuable discussion of theoretical issues surrounding the study of the chronicle as it is currently practiced in Mexico. It balances theory and criticism to lend new insight into the ties between Mexican society, social conscience, and literature.

AUTHOR BIOGRAPHY
Linda Egan is Associate Professor in the Department of Spanish and Classics at the University of California, Davis.