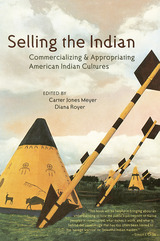 For more than a hundred years, outsiders enamored of the perceived strengths of American Indian cultures have appropriated and distorted elements of them for their own purposes—more often than not ignoring the impact of the process on the Indians themselves. This book contains eight original contributions that consider the selling of American Indian culture and how it affects the Native community. It goes beyond studies of “white shamanism” to focus on commercial ventures, challenging readers to reconsider how Indian cultures have been commercialized in the twentieth century.

Some selections examine how Indians have been displayed to the public, beginning with a “living exhibit” of Cocopa Indians at the 1904 Louisiana Purchase Exposition and extending to contemporary stagings of Indian culture for tourists at Tillicum Village near Seattle. Other chapters range from the Cherokees to Puebloan peoples to Indians of Chiapas, Mexico, in an examination of the roles of both Indians and non-Indian reformers in marketing Native arts and crafts.