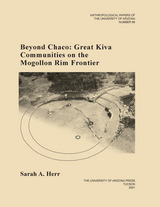 During the eleventh and twelfth centuries A.D., the Mogollon Rim region of east-central Arizona was a frontier, situated beyond and between larger regional organizations such as Chaco, Hohokam, and Mimbres. On this southwestern edge of the Puebloan world, past settlement poses a contradiction to those who study it. Population density was low and land abundant, yet the region was overbuilt with great kivas, a form of community-level architecture. Using a frontier model to evaluate household, community, and regional data, Sarah Herr demonstrates that the archaeological patterns of the Mogollon Rim region were created by the flexible and creative behaviors of small-scale agriculturalists. These people lived in a land-rich and labor-poor environment in which expediency, mobility, and fluid social organization were the rule and rigid structures and normative behaviors the exception. Herr's research shows that the eleventh- and twelfth-century inhabitants of the Mogollon Rim region were recent migrants, probably from the southern portion of the Chacoan region. These early settlers built houses and ceremonial structures and made ceramic vessels that resembled those of their homeland, but their social and political organization was not the same as that of their ancestors. Mogollon Rim communities were shaped by the cultural backgrounds of migrants, by their liminal position on the political landscape, and by the unique processes associated with frontiers. As migrants moved from homeland to frontier, a reversal in the proportion of land to labor dramatically changed the social relations of production. Herr argues that when the context of production changes in this way, wealth-in-people becomes more valuable than material wealth, and social relationships and cultural symbols such as the great kiva must be reinterpreted accordingly. Beyond Chaco expands our knowledge of the prehistory of this region and contributes to our understanding of how ancestral communities were constituted in lower-population areas of the agrarian Southwest.
AUTHOR BIOGRAPHY
Sarah A. Herr is a senior project director at Desert Archaeology in Tucson. Her nearly ten years of research in eastern Arizona focuses on understanding the social and political organizations of regions dominated by small settlements.
TABLE OF CONTENTS
Contents
Preface
Acknowledgments
1. Material Patterning in the Archaeological Record: The Weak and The Strong
2. Frontiers
3. Local Expressions, Regional Organizations
4. After the Migration: Mogollon Rim Communities
5. Integration of Households and Communities
6. Beyond Chaco: The Frontier Experience
Appendix A: Architectural Details of Excavated Rooms in the Mogollon Rim Region
Appendix B: Ceramic Analyses
References
Index
Abstract, Resumen