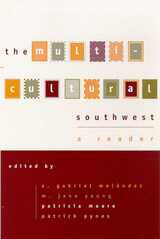 As Americans debate what it means to be a multicultural society, one need only turn for lessons to the Southwest, where distinct peoples have coexisted over centuries. Here difference has not only survived but thrived in a melting pot of races and customs.

This book presents a montage of differing perspectives demonstrating that there is no single, definitive description of the Southwest. It brings together a host of writers, from early travelers and historians to contemporary commentators, who explore a region diverse in its people and ecology and show it to be not just a segment of the nation, but rather a border contact zone.

The editors have assembled an interdisciplinary composite, drawing on history, sociology, anthropology, and geography. Fiction, essays, poetry, newspaper articles, and interviews with local inhabitants add a colorful dimension to the coverage. All of the contributions reveal the tremendous impact that everyday occurrences can have and show how life in the Southwest is affected by the interweaving of social, cultural, and ecological forces. Together they demonstrate the role played by personal and cultural memory in creating alternative views of environment, landscape, human social interaction, conquest, dispossession, technological change, and the survival of cultures.

The Multicultural Southwest is a multifaceted work that shows the many ways in which the past continues to affect the present. It will create in readers an awareness of the phenomena that fuel human imagination and creativity as it opens their eyes to the possibilities of the future.

AUTHOR BIOGRAPHY
A. Gabriel Meléndez is Professor and Chairman of the Department of American Studies at the University of New Mexico. M. Jane Young is Professor of American Studies and Regents Lecturer, both at the University of New Mexico. The Reverend Patricia Moore is affiliated with the Church of the Incarnation in Santa Rosa, California. Patrick Pynes is an environmental consultant at Northern Arizona University.
TABLE OF CONTENTS


Introduction
I. SOUTHWESTERN VIEWS, ETHNIC ANGLES 1
II. PERCEPTIONS OF THE OTHER 41
III. NATIVE AMERICA 81
V. BORDERLANDS AMERICA 137
VI. ENVIRONMENT, TECHNOLOGY, AND THE PEOPLES OF THE SOUTHWEST 171
VII. MAKING CULTURE: THE FUTURE SOUTHWEST 2
Credits
About the Contributors
About the Editors