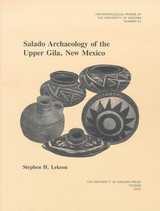 Salado Archaeology of the Upper Gila, New Mexico
by Stephen H. Lekson
University of Arizona Press, 2002
Paper: 978-0-8165-2222-4
Salado is an enigma of the past. One of the most spectacular cultures of the ancient Southwest, its brilliant polychrome pottery has been subjected to varied interpretations, from religious cult to artistic horizon. Stephen Lekson now uses data from two Salado sites—a large pueblo and a small farmstead—to clarify long-standing misconceptions about this culture. By combining analysis of the large whole-vessel collection at Dutch Ruin with the scientific excavation of Villareal II, a picture of Salado emerges that enables Lekson to evaluate previous competing theories and propose that Salado represents a major fourteenth-century migration of Pueblo peoples into the Chihuahuan deserts. Lekson demonstrates that late, short-lived Salado farmsteads—difficult to identify archaeologically in areas with larger Mimbres concentrations—coexisted with larger Salado towns, and he argues that Salado in the Upper Gila region appears as a substantial in-migration of Mogollon Uplands populations into what was a vacant river valley. Throughout the fourteenth century, Salado communities in the Upper Gila were integrated into the larger Salado horizon and were closely connected to Casas Grandes, as indicated by the export of serpentine to the city of Paquimé and the occurrence of Casas Grandes pottery at Upper Gila Salado sites. The book includes illustrations of 71 vessels from Dutch Ruin plus a full-color frontispiece. Through analysis of these two sites, Lekson has taken a large step toward clearing up the mystery of Salado. His work will be welcomed by all who study the movements of peoples in the prehispanic Southwest.
AUTHOR BIOGRAPHY
Stephen H. Lekson is Curator of Anthropology at the University Museum, University of Colorado.