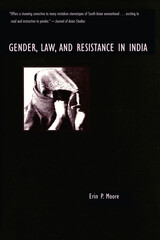 Theft, poisoning, affairs, flights home, refusals to work, eat or have sex, threats to divide the joint household, and sly acts of sabotage are some of the domestic warfare tactics employed by Muslim women attempting to resist patriarchy. Gender, Law, and Resistance in India dramatically illustrates how a patriarchal ideology is upheld and reinforced through male-governed social and legal institutions and how women defy that control. Based on anthropological fieldwork in rural Rajasthan in northern India, Erin Moore's book details the life of an extended Muslim family she has known for twenty years. In many ways the plight of the central character, Hunni, is representative of dilemmas experienced by the majority of north Indian peasant women. Ultimately an account of cultural hegemony and defiance, Gender, Law, and Resistance in India reveals how so-called "modern" state institutions and practices reinforce traditional arrangements, resulting in women being silenced, deprived of equal rights before the law, and returned to their male guardians. Still, women resist in overt and covert ways. The first ethnographic work to focus principally on the law and legal institutions of gender and agency in South Asia, this unique volume examines the interpenetrations of north India's pluralistic legal systems. Moore adeptly connects engrossing case histories to national dialogues over women's rights, discussing these issues in terms of Muslim personal laws, secularism, and communal violence. Gender, Law, and Resistance in India is a rich and truly significant contribution to gender studies, South Asian studies, and sociolegal studies.
AUTHOR BIOGRAPHY
Erin Moore has conducted ethnographic fieldwork in India and Mexico, and practiced law at Evergreen Legal Services in Washington state and at the L.A. Center for Law and Justice. She is currently a research scholar in the anthropology department at the University of Southern California.