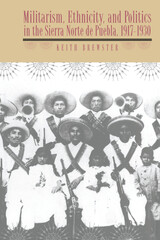 In the wake of the Mexican Revolution, citizens in many parts of Mexico experienced turbulent and uncertain times. This book tells the story of how the people of the Sierra Norte de Puebla emerged from those traumatic years and came to terms with the many challenges facing them in the decade that followed. It also examines the phenomenon of caciquismo in the postrevolutionary period as seen in the career of one powerful individual.

Gabriel Barrios Cabrera, leader of the Brigada Serrana, rose from rural obscurity in the tiny village of Cuacuila to a position of unprecedented military strength during the Revolution, and throughout the 1920s he and his brother Demetrio came to enjoy the confidence of the nation's presidents. This work provides an in-depth look at how a local political boss held on to power. Keith Brewster reveals how the story of the Sierra is inextricably linked to that of the Barrios Cabrera family, and he investigates the ways in which this interconnection developed.

Brewster argues that Barrios owed his long prominence to his sensitivity to the region's culture, but also shows that the extent of his power was exaggerated by both contemporaries and historians. Barrios was able to develop a working relationship with the federal government by endorsing its objectives and convincing them of his own indispensability, but his authority depended on the weakness of the federal government and on infighting within the Puebla state government; once both governments stabilized, Barrios quickly lost his grip on power.

Masterfully blending archival sources and oral history, Brewster captures life in the Sierra during the 1920s and examines the decision-making processes that determined how communities responded to new pressures, such as requests for soldiers or support for development projects. He shows that subaltern groups were able to shape and even resist state reforms, mustering evidence that the Sierra's indigenous communities drove hard bargains over issues affecting their everyday lives. Although many communities used Barrios as an intermediary, Brewster reveals that they did not universally accept his legitimacy but simply used his connections to pursue their own local agendas.

Brewster depicts the Sierra de Puebla of the 1920s as a scene of shifting balances of power where political, economic, social, and ethnic factors combined to produce the temporary ascendancy of different interest groups beyond and within the region. His study forces us to question assumptions about how power was exercised at the local and regional levels in postrevolutionary Mexico and will be of lasting interest to all concerned with the dynamics of caciquismo and the evolution of the Mexican political system.

"Barrios’s career throws some light on the process that gradually turned regional armed bands into something resembling a national army. . . . Brewster has done a masterful job of exploring a variety of public and private archives." —Journal of Military History

"Based on meticulous research . . . Brewster’s bottom-up approach presents us a flexible cacique confronted with ever-changing relationships to the state and fluctuating and differing balances of power between the Barrios clan, its jefes de armas and community leaders." —Journal of Latin American Studies

“Profoundly revisionist, a useful injection of realism amid the burgeoning literature on Mexican local history.”—Bulletin of Spanish Studies
— -