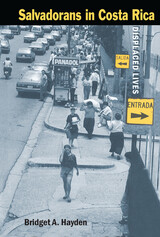 During the political and economic upheaval that swept El Salvador in the 1980s, as many as 20,000 Salvadorans took refuge in Costa Rica. Despite similarities between the countries, most Salvadorans experienced El Salvador and Costa Rica as very different places; yet some 6,000 chose to remain after the violence in their country ended, re-establishing their lives successfully enough that they claimed that they now "felt Costa Rican." Bridget Hayden examines the ways in which these people integrated into Costa Rican society and the ambiguous sense of identity they developed, exploring their experience of the process and the cultural concepts they used to interpret those experiences.

Salvadorans in Costa Rica: Displaced Lives introduces readers to people from a wide range of class and educational backgrounds who had come to Costa Rica from all over El Salvador. All shared the experience of having become refugees and having settled in a new country under the same circumstances, and when the war in their own country ended, they shared a concern about the issues involved in deciding whether to return there. Their diversity allows Hayden to examine the ways in which the language of national identity played out in different contexts and sometimes contradictory ways.

Drawing on contemporary theories of migration and space, Hayden identifies the discourses, narratives, and concepts that Salvadorans in Costa Rica had in common and then analyzes the ways in which their experiences and their uses of those discourses varied. She focuses on key spatial concepts that Salvadorans used in talking about displacement and re-emplacement in order to show how they constructed the experience of settlement and how such variables as gender and age influenced their experiences. Because "nationality" was an idiom they used to relate their experiences, she pays particular attention to the role of national belonging and national difference—in terms of both the ways in which the Salvadorans were received by Costa Ricans and their reactions to their new lives in Costa Rica. A concluding chapter compares them with Salvadorans who emigrated to other countries.

The story of these displaced Salvadorans, focusing on the lives of real people, can give us a new understanding of how individuals feel a sense of belonging to a sociocultural space. By exploring many meanings of the nation and national belonging for different people under varying conditions, Hayden's study provides fresh insights into the dynamics of migration, gender, and nationalism.

"Hayden commits us to take seriously the pain of exclusion and the difficulties of lives that have been split in half." —Journal of Anthropological Research
— -