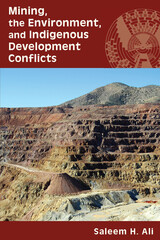 From sun-baked Black Mesa to the icy coast of Labrador, native lands for decades have endured mining ventures that have only lately been subject to environmental laws and a recognition of treaty rights. Yet conflicts surrounding mining development and indigenous peoples continue to challenge policy-makers.

Mining, the Environment, and Indigenous Development Conflicts presents four cases from the United States and Canada: the Navajos and Hopis with Peabody Coal in Arizona; the Chippewas with the Crandon Mine proposal in Wisconsin; the Chipewyan Inuits, Déné and Cree with Cameco in Saskatchewan; and the Innu and Inuits with Inco in Labrador. These cases exemplify different historical relationships with government and industry and provide an instance of high and low levels of Native resistance in each country. Through these cases, Ali analyzes why and under what circumstances tribes agree to negotiated mining agreements on their lands, and why some negotiations are successful and others not.

Ali challenges conventional theories of conflict based on economic or environmental cost-benefit analysis, which do not fully capture the dynamics of resistance. He proposes that the underlying issue has less to do with environmental concerns than with sovereignty, which often complicates relationships between tribes and environmental organizations. Activist groups, he observes, fail to understand such tribal concerns and often have problems working with tribes on issues where they may presume a common environmental interest.

This book goes beyond popular perceptions of environmentalism to provide a detailed picture of how and when the concerns of industry, society, and tribal governments may converge and when they conflict. As demands for domestic energy exploration increase, it offers clear guidance for such endeavors when native lands are involved.
AUTHOR BIOGRAPHY
Saleem H. Ali is Assistant Professor of Environmental Studies at the University of Vermont and Research Scholar at the Watson Institute for International Studies at Brown University.
TABLE OF CONTENTS

Part I Communities of Interest and Emergent Conflict
1 Mining on Indigenous Lands: The North American Experience
2 The Resistance Brokers: Environmental ???s and Mining
3 Mining Companies and Management Dilemmas: The Cost of Business
4 The Embedded Stakeholder: Governmental Strata in the United States and Canada
Part II Analyzing Resistance
5 From Nain to Navajo: The Stories behind the Scenery
6 Science and Elements of Social Construction: Some Shadow Hypotheses
7 Indigenous-Environmentalist Relations: External Influence and Resistance Outcomes
8 Ambiguous Property: The Linkage Politics of Land Claims
Part III The Prescriptive Synthesis
9 Resistance and Cooperation: Understanding Indigenous Proclivities
10 Planning for Sustainable Development: Some Advice for Stakeholders