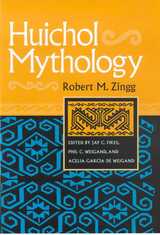 Best known for their ritual use of peyote, the Huichol people of west-central Mexico carried much of their original belief system into the twentieth century unadulterated by the influence of Christian missionaries. Among the Huichol, reciting myths and performing rituals pleases the ancestors and helps maintain a world in which abundant subsistence and good health are assured.

This volume is a collection of myths recorded by Robert Zingg in 1934 in the village of Tuxpan and is the most comprehensive record of Huichol mythology ever published. Zingg was the first professional anthropologist to study the Huichol, and his generosity toward them and political advocacy on their behalf allowed him to overcome tribal sanctions against divulging secrets to outsiders. He is fondly remembered today by some Huichols who were children when he lived among them. Zingg recognized that the alternation between dry and wet seasons pervades Huichol myth and ritual as it does their subsistence activities, and his arrangement of the texts sheds much light on Huichol tradition. The volume contains both aboriginal myths that attest to the abiding Huichol obligation to serve ancestors who control nature and its processes, and Christian-inspired myths that document the traumatic effect that silver mining and Franciscan missions had on Huichol society.

First published in 1998 in a Spanish-language edition, Huichol Mythology is presented here for the first time in English, with more than 40 original photographs by Zingg accompanying the text. For this volume, the editors provide a meticulous historical account of Huichol society from about 200 A.D. through the colonial era, enabling readers to fully grasp the significance of the myths free of the sensationalized interpretations found in popular accounts of the Huichol. Zingg’s compilation is a landmark work, indispensable to the study of mythology, Mexican Indians, and comparative religion.
TABLE OF CONTENTS