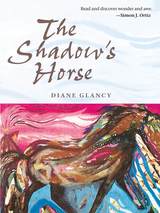 The Shadow’s Horse
by Diane Glancy
University of Arizona Press, 2003
Paper: 978-0-8165-2328-3
There is a saying in Native American tradition that "wholeness is when the shadow of the rider and his horse are one." Although we usually focus our attention on what seems most real, Diane Glancy shows us that the shadow of our past has substance as well.

The Shadow's Horse is a new collection of poems in which Glancy walks the margin between her white and Indian heritage. In poems that conjure the persistence of fallen leaves or juxtapose images of Christ and the stockyards, she powerfully evokes place and spirit to address with intelligence and beauty issues of family, work, and faith.

In some of these poems Glancy recalls growing up with her Cherokee father, who worked in a stockyard, radically applying Christian theology to the slaughter of non-human creatures: The cattle go up the ramp
dragging their crosses.
Their voices are Gregorian chants
rising to the blue sky,
the cold clouds.

In others she examines the walk of history through the ordinary details of life-history seen from two points of view, early Euro-American and contemporary Native American. She sees her Native heritage as shortlived and fragile, yet as enduring as leaves, and she asks, "If you line up all the leaves that fall / how many times will they go around the earth?"

Writing in a cross-boundaried, fragmented voice—a voice based on the memory of the way language sounded when it was stretched across the cultures or walked in both worlds—Glancy has fashioned a book about speaking oneself into existence. The Shadow's Horse is the story of one culture made to sing the song of another until the Native voice is so erased it is nearly an illusion. Yet as readers of these poems will discover, the shadow of the past is as real as the horse it rides.

AUTHOR BIOGRAPHY
Diane Glancy is the recipient of a National Endowment for the Arts grant, an Oklahoma Book Award, a Minnesota Book Award, an American Book Award from the Before Columbus Foundation, and the Native American Prose Award. Her previous books include The Cold-and-Hunger Dance, a collection of essays, and Stone Heart: A Novel of Sacajawea. She teaches Native American Literature and Creative Writing at Macalester College in St. Paul, Minnesota.