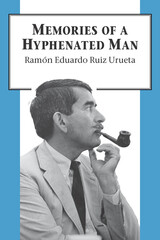 Ramon Eduardo Ruiz would be the first to admit that he is not your typical Mexican American. But he has always known who he is.

Historian, author, and intellectual, Ruiz has established himself through such books as Triumphs and Tragedy: A History of the Mexican People and Cuba: The Making of a Revolution, and in 1998 he was awarded the National Humanities Medal by President Clinton. Now he turns his pen on his own life to offer a personal look at what it really means to be American by birth but Mexican by culture.

Little has been written by or about persons of Mexican origin who have achieved the academic stature of Ruiz, and his memoir provides insights not found in the more common biographies of labor leaders and civil rights activists. His early life straddled the social worlds of his parent's Mexico and semi-rural America, where his father's success as an entrepreneur and property owner set his family's experiences apart from those of most other Mexican Americans at the time. His parents reinforced in their children an identity as mexicanos, and that connection with his ancestral roots was for Ruiz a lifejacket in the days of acute bigotry in America.

In making an early, self-conscious commitment to a life of the mind, Ruiz became aware of his unique nature, and while not immune to prejudice he was able to make a name for himself in several endeavors. As a student, he attended college when few Mexican Americans were given that opportunity, and he was one of the first of his generation to earn a Ph.D. As an Army Air Force officer during World War II, he served as a pilot in the Pacific theatre. And as an intellectual, he navigated the currents of the historical profession and charted new directions in Latin American research through his prolific writing.

Ruiz's career teaching took him to Mexico, Massachusetts, Texas, Oregon—often as the lone "Mexican professor," and ultimately back to his native California. While teaching at Smith, he exulted in being "free to interpret Spanish American life and culture to my heart's content," and at the University of California, San Diego, he saw the era of campus racial barrier give way to the birth of affirmative action. While at UCSD, he taught hundreds of Chicanos and trained one of the largest groups of Chicano Ph.D's.

Memories of a Hyphenated Man is the story of a unique individual who, while shaped by his upbringing and drawing on deep cultural roots, steadfastly followed his own compass in life. It tells of a singular man who beat the odds as it poignantly addresses the ambiguities associated with race, class, citizenship, and nationality for Mexicans and Mexican Americans.

AUTHOR BIOGRAPHY
Ramón Eduardo Ruiz Urueta is presently Professor Emeritus at the University of California, San Diego, where he served as chairman of the Department of History from 1971-76.
TABLE OF CONTENTS