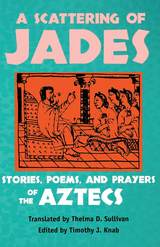 A Scattering of Jades: Stories, Poems, and Prayers of the Aztecs
translated by Thelma D. Sullivan
edited by Timothy J. Knab
University of Arizona Press, 2003
Paper: 978-0-8165-2337-5
Long before Europeans came to America, the Aztecs created a unique culture based on myth and a love of language. Myths and poems were an important part of their culture, and a successful speech by a royal orator was pronounced "a great scattering of jades." A Scattering of Jades is an anthology of the best of Aztec literature, compiled by a noted anthropologist and a skilled translator of Nahuatl. It is a storehouse of myths, narratives, poems, and proverbs—as well as prayers and songs to the Aztec gods that provide insight into how these people's perception of the cosmos drove their military machine. Featuring a translation of the Mexicayotl—a work as important today for Mexico's concept of nationhood and ideology as it was at the time of the Conquest—these selections eloquently depict the everyday life of this ancient people and their unique worldview. A Scattering of Jades is an unsurpassed window on ancient Mesoamerican civilization and an essential companion for anyone studying Aztec history, religion, or culture.
AUTHOR BIOGRAPHY
Timothy J. Knab is the author of A War of Witches: A Journey into the Underworld of the Contemporary Aztecs.