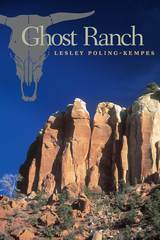 For more than a century, Ghost Ranch has attracted people of enormous energy and creativity to the high desert of northern New Mexico. Occupying twenty-two thousand acres of the Piedra Lumbre basin, this fabled place was the love of artist Georgia O’Keeffe’s life, and her depictions of the landscape catapulted Ghost Ranch to international recognition. Building on the history of the Abiquiu region that she told in Valley of Shining Stone, Ghost Ranch historian Lesley Poling-Kempes now unfolds the story of this celebrated retreat. She traces its transformation from el Rancho de los Brujos, a hideout for legendary outlaws, to a renowned cultural mecca and one of the Southwest’s premier conference centers. First a dude ranch, Ghost Ranch became a magical sanctuary where the veil between heaven and earth seemed almost transparent. Focusing on those who visited from the 1920s and ’30s until the 1990s, Poling-Kempes tells how O’Keeffe and others—from Boston Brahmin Carol Bishop Stanley to paleontologist Edwin H. Colbert, Los Alamos physicists to movie stars—created a unique community that evolved into the institution that is Ghost Ranch today. For this book, Poling-Kempes has drawn on information not available when Valley of Shining Stone was written. The biography of Juan de Dios Gallegos has been enhanced and definitively corrected. The Robert Wood Johnson (of Johnson & Johnson) years at Ghost Ranch are recounted with reminiscences from family members. And the memories of David McAlpin Jr. shed light on how the Princeton circle that included the Packs, the Johnson brothers, the Rockefellers, and the McAlpins ended up as summer neighbors on the high desert of New Mexico. After Arthur Pack’s gift of the ranch to the Presbyterian Church in 1955, Ghost Ranch became a spiritual home for thousands of people still awestruck by the landscape that O’Keeffe so lovingly committed to canvas; yet the care taken to protect Ghost Ranch’s land and character has preserved its sense of intimacy. By relating its remarkable story, Poling-Kempes invites all visitors to better appreciate its place as an honored wilderness—and to help safeguard its future.
AUTHOR BIOGRAPHY
Lesley Poling-Kempes has been associated with the Ghost Ranch Conference Center since the mid 1970s. Her other books include The Harvey Girls: Women Who Opened the West; and a novel, The Canyon of Remembering.
TABLE OF CONTENTS