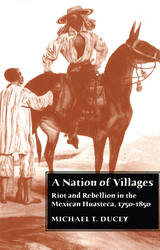 A Nation of Villages: Riot and Rebellion in the Mexican Huasteca, 1750-1850
by Michael T. Ducey
University of Arizona Press, 2004
Cloth: 978-0-8165-2383-2
During the period 1769-1850, republican national institutions slowly replaced colonial and monarchical rule. This was a turbulent time in rural Mexico. It was a period of political instability marked by violent peasant rebellions that were longer, more violent, and involved more people than those that occurred in the colonial era. Mexican villagers became skilled insurrectionists. In this book, Michael Ducey analyzes the peasant rebellions in Mexico’s Huasteca region over that time, beginning with short-lived colonial riots, progressing through a long and brutal insurrection associated with the war of independence and several region-wide uprisings, and culminating in the "Caste War of the Huasteca" of the 1840s.

He asks not just why villagers revolted but how their discontent fit into the political drama of early national Mexico. Ducey shows how the war offered opportunities for villagers to settle scores with members of the local elite as peasants discovered new ways of imagining the state. They were far from being the isolated traditionalists who occasionally rebelled against political or economic change described in older scholarship. At least until the 1848-1850 Caste War, political disputes were more important than land.

This region’s peasants were both remarkably diverse and politically astute. Villagers adapted colonial political culture and later republican ideas to fashion local institutions that fit their own needs. Over the course of a hundred years, peasant tactics and political discourse evolved in a constant dialogue with the changing political climate, shifting from rhetorical statements of loyalty to the king to proclamations of federalism and their rights as citizens. A Nation of Villages ably demonstrates that rural villagers were more aware of elite ideologies than urban rulers were of the villagers’ political ideas. This long-term analysis of one region illuminates how rural people helped shape the republican state.
AUTHOR BIOGRAPHY
Michael T. Ducey is Associate Professor in the Department of History and Director of the International Studies Program, University of Colorado at Denver.