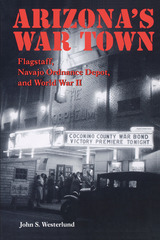 Few American towns went untouched by World War II, even those in remote corners of the country. During that era, the federal government forever changed the lives of many northern Arizona citizens with the construction of the U.S. Army ordnance depot at Bellemont, ten miles west of Flagstaff. John Westerlund now tells how this linchpin in the war effort marked a turning point in Flagstaff's history. One of only sixteen munitions depots built between 1941 and 1943, the Navajo Ordnance Depot contributed significantly to the city's rapid growth during the war years as it brought considerable social, cultural, and economic change to the region.

A clearing in the ponderosa pine forest called Volunteer Prairie met the military's criteria for a munitions depot—open terrain, a cool climate, plentiful water, and proximity to a railroad—and it was also sufficiently inland to be safe from the threat of coastal invasion. Constructing a depot of 800 ammunition bunkers, each the size of a 2,000-square-foot home, called for a force of 8,000 laborers, and Flagstaff became a boom town overnight as construction workers and their families poured in from nearby Indian reservations and as far away as the Midwest and South. More than 2,000 were retained as permanent employees—a larger workforce than Flagstaff's total pre-war employment roster.

As Westerlund's portrait of wartime Flagstaff shows, prosperity brought unanticipated consequences: racism simmered beneath the surface of the town as ethnic groups were thrown together for the first time; merchants called a city-wide strike to protest emerging union activity; juvenile delinquency rose dramatically; Flagstaff women entered the workforce in unprecedented numbers, altering local mores along with their own plans for the future; meanwhile, hundreds of sailors and marines arrived at Arizona State Teachers College to participate in the Navy's "V-12" program. Whether recounting the difficulty of 3,500 Navajo and Hopi employees adjusting to life off the reservation or the complaints of townspeople that Austrian POWs-transferred to the depot to ease the labor shortage-were treated too well, Westerlund shows that the construction and maintenance of the facility was far more than a military matter.

Navajo Ordnance Depot remained operational to support wars in Korea, Vietnam, and the Persian Gulf, and today Camp Navajo provides storage for thousands of deactivated ICBM motors. But in recounting its early days, Westerlund has skillfully blended social and military history to vividly portray not only a city's transitional years but also the impact of military expansion on economic and community development in the American West.