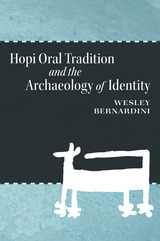 As contemporary Native Americans assert the legacy of their ancestors, there is increasing debate among archaeologists over the methods and theories used to reconstruct prehistoric identity and the movement of social groups. This is especially problematic with respect to the emergence of southwestern tribes, which involved shifting populations and identities over the course of more than a thousand years.

Wesley Bernardini now draws on an unconventional source, Hopi traditional knowledge, to show how hypotheses that are developed from oral tradition can stimulate new and productive ways to think about the archaeological record. Focusing on insights that oral tradition has to offer about general processes of prehistoric migration and identity formation, he describes how each Hopi clan acquired its particular identity from the experiences it accumulated on its unique migration pathway. This pattern of “serial migration” by small social groups often saw the formation of villages by clans that briefly came together and then moved off again independently, producing considerable social diversity both within and among villages.

Using Anderson Mesa and Homol’ovi as case studies, Bernardini presents architectural and demographic data suggesting that the fourteenth century occupation of these regions was characterized by population flux and diversity consistent with the serial migration model. He offers an analysis of rock art motifs—focusing on those used as clan symbols—to evaluate the diversity of group identities, then presents a compositional analysis of Jeddito Yellow Ware pottery to evaluate the diversity of these groups’ eventual migration destinations.

Evidence supporting serial migration greatly complicates existing notions of links between ancient and modern social groups, with important implications for the implementation of the Native American Graves Protection and Repatriation Act. Bernardini’s work clearly demonstrates that studies of cultural affiliation must take into account the fluid nature of population movements and identity in the prehistoric landscape. It takes a decisive step toward better understanding the major demographic change that occurred on the Colorado Plateau from 1275 to 1400 and presents a strategy for improving the reconstruction of cultural identity in the past.

AUTHOR BIOGRAPHY
Wesley Bernardini is an assistant professor in the Department of Sociology and Anthropology at the University of Redlands.
REVIEWS
"Hopi Oral Tradition and the Archaeology of Identity sheds new light on a difficult and sometimes emotionally charged matter." —Wisconsin Bookwatch

“Quite simply, given the wealth of its insights and offerings, this book is a must read”—Journal of Anthropological Research