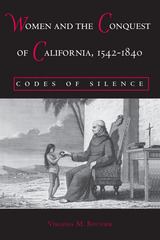 Studies of the Spanish conquest in the Americas traditionally have explained European-Indian encounters in terms of such factors as geography, timing, and the charisma of individual conquistadores. Yet by reconsidering this history from the perspective of gender roles and relations, we see that gender ideology was a key ingredient in the glue that held the conquest together and in turn shaped indigenous behavior toward the conquerors. This book tells the hidden story of women during the missionization of California. It shows what it was like for women to live and work on that frontier—and how race, religion, age, and ethnicity shaped female experiences. It explores the suppression of women's experiences and cultural resistance to domination, and reveals the many codes of silence regarding the use of force at the missions, the treatment of women, indigenous ceremonies, sexuality, and dreams.

Virginia Bouvier has combed a vast array of sources— including mission records, journals of explorers and missionaries, novels of chivalry, and oral histories— and has discovered that female participation in the colonization of California was greater and earlier than most historians have recognized. Viewing the conquest through the prism of gender, Bouvier gives new meaning to the settling of new lands and attempts to convert indigenous peoples. By analyzing the participation of women— both Hispanic and Indian— in the maintenance of or resistance to the mission system, Bouvier restores them to the narrative of the conquest, colonization, and evangelization of California. And by bringing these voices into the chorus of history, she creates new harmonies and dissonances that alter and enhance our understanding of both the experience and meaning of conquest.
AUTHOR BIOGRAPHY
Virginia M. Bouvier is Assistant Professor of Latin American Literature at the University of Maryland, College Park, and editor of Whose America? The War of 1898 and the Battles to Define the Nation and The Globalization of U.S.-Latin American Relations: Democracy, Intervention, and Human Rights.