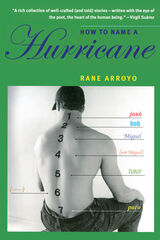 How to Name a Hurricane
by Rane Arroyo
University of Arizona Press, 2005
Paper: 978-0-8165-2460-0
There’s no denying it, media culture has ushered in a new era of visibility for gays in America. Yet somehow the gay Latino doesn’t fit into this sound-bite identity and usually isn’t included in national media images. Rane Arroyo offers a corrective. Known primarily as a poet and playwright representing the gay Latino community, Arroyo has also been publishing prose throughout his career and now gathers into this book a storm of writing that has been gaining strength, drop by drop, for more than ten years.

How to Name a Hurricane collects short stories and other fictions depicting Latino drag queens and leather men, religious sinners and happy atheists, working class heroes and cyberspace vaqueros—a parade of characters that invites readers to consider whether one is more authentic a gay Latino than another. Whereas actual hurricanes are given names, the gays given voice in this collection must name themselves—and these narratives in turn reveal something of the "I" of Hurricane Rane. Whether portraying a family gathering as Brideshead Revisited with a mambo soundtrack, recounting the relationship of transvestite Louie/Lois and her bisexual Superman, or bemoaning "feeling as unsexy as an old bean burrito in a 7-11 microwave," Arroyo tracks the heartbeat of his characters through a shimmering palette of styles. Here are monologues, a story in verse, and other experimental forms appropriate to experimental lives—all affirming the basic human rights to dignity, equality, love, and even silliness.

When the AIDS epidemic first hit, many Latino families destroyed any remembrances of their gay and bisexual sons that might betray their pasts to la familia or el pueblo. Arroyo’s writings return the ghosts of those sons to the families, bars, dance clubs, and neighborhoods where they belong. By penetrating to the I’s of narrative hurricanes, these stories honor the survivors of our ongoing cultural storms.
AUTHOR BIOGRAPHY
Rane Arroyo's previous collections include The Singing Shark, which won the Carl Sandburg Poetry Award. He is Professor of Creative Writing at the University of Toledo.
TABLE OF CONTENTS