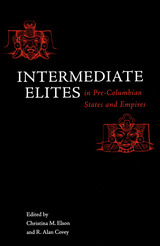 Intermediate Elites in Pre-Columbian States and Empires
edited by Christina M. Elson and R. Alan Covey
University of Arizona Press, 2006
Cloth: 978-0-8165-2476-1
From the Mesoamerican highlands to the Colca Valley in Peru, pre-Columbian civilizations were bastions of power that have largely been viewed through the lens of rulership, or occasionally through bottom-up perspectives of resistance. Rather than focusing on rulers or peasants, this book examines how intermediate elites—both men and women—helped to develop, sustain, and resist state policies and institutions. Employing new archaeological and ethnohistorical data, its contributors trace a 2,000-year trajectory of elite social evolution in the Zapotec, Wari, Aztec, Inka, and Maya civilizations.

This is the first volume to consider how individuals subordinate to imperial rulers helped to shape specific forms of state and imperial organization. Taking a broader scope than previous studies, it is one of the few works to systematically address these issues in both Mesoamerica and the Central Andes. It considers how these individuals influenced the long-term development of the largest civilizations of the ancient Americas, opening a new window on the role of intermediate elites in the rise and fall of ancient states and empires worldwide.

The authors demonstrate how such evidence as settlement patterns, architecture, decorative items, and burial patterns reflect the roles of intermediate elites in their respective societies, arguing that they were influential actors whose interests were highly significant in shaping the specific forms of state and imperial organization. Their emphasis on provincial elites particularly shifts examination of early states away from royal capitals and imperial courts, explaining how local elites and royal bureaucrats had significant impact on the development and organization of premodern states.

Together, these papers demonstrate that intricate networks of intermediate elites bound these ancient societies together—and that competition between individuals and groups contributed to their decline and eventual collapse. By addressing current theoretical concerns with agency, resistance to state domination, and the co-option of local leadership by imperial administrators, it offers valuable new insight into the utility of studying intermediate elites.
AUTHOR BIOGRAPHY
Christina M. Elson is a curatorial associate at the American Museum of Natural History. R. Alan Covey is assistant professor of Anthropology at Southern Methodist University.
TABLE OF CONTENTS