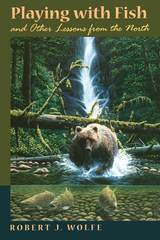 Playing with Fish and Other Lessons from the North
by Robert J. Wolfe
University of Arizona Press, 2006
Paper: 978-0-8165-2485-3
According to the Yup’ik Eskimo of Alaska, fish are not to be played with. It’s an adage instilled in children that’s as basic as looking both ways before crossing the street, but at its heart lies a concern for nature. Yup’ik traditions are tested each generation by this people’s struggle for survival, the admonition not to play with fish has been further tested by the arrival of sport fishing from the south. Worlds are colliding—whose will emerge unscathed? Robert J. Wolfe, a cultural anthropologist from California, spent twenty years in Alaska documenting the traditional hunting and fishing practices of Alaska Natives. During that northern sojourn he discovered much about sustainable relationships between people and nature and about the basis of meaningful communities. In Playing with Fish he has crafted a series of thought-provoking essays on nature, culture, and the human condition that convey unsuspected lessons from the North. In contrasting California and Alaska—worlds far apart yet connected by peoples, cultural traditions, and ecology—Wolfe not only draws distinctions between compass points, he also conveys memorable stories about nature and life. He depicts bears and humans as both neighbors and ancient adversaries, and how cultural views about bears can destroy or preserve those relationships. He shows us Alaskan villages where security is found not in locks but in neighbors, unlike electronically sealed suburban California homes, their lawns studded with security signs. And he describes the peaceful resolution of conflict between California bird hunters and Eskimos of the Bering Sea coast over declining geese numbers, where small humanizing acts tipped the balance in favor of cooperation. Blending insights into subjects as diverse as music and chaos theory, Wolfe challenges readers to reflect on their own personal conduct within nature and within our multicultural world. Playing with Fish is a delightful and insightful collection of modern parables that offer a new way of looking at cultural and ecological issues, reminding us that the road between two worlds is always a two-way street.
AUTHOR BIOGRAPHY
Robert J. Wolfe, Ph.D., formerly research director in the Alaska Department of Fish and Game’s Subsistence Division, currently conducts anthropological research from his home in San Marcos, California.
TABLE OF CONTENTS