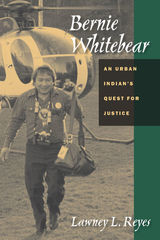 When American Indians left reservations in the 1950s, enticed by the federal government’s relocation program, many were drawn to cities like Tacoma and Seattle. But in these new homes they found unemployment and discrimination, and they were no better off. Sin Aikst Indian Bernie Whitebear was an urban activist in the Pacific Northwest during the last decades of the twentieth century, a man dedicated to improving the lives of Indians and other ethnic groups by working for change and justice. He unified Northwest tribes to fight for the return of their land and was the first to accomplish this in the United States. But far from a fearsome agitator, Bernie was a persuasive figure who won the praise and admiration of an entire community. Bernie began organizing powwows in the 1960s with an eye toward greater authenticity; and by making a name in the Seattle area as an entertainment promoter, he soon became a successful networker and master of diplomacy, enabling him to win over those who had long ignored the problems of urban Indians. Soft-spoken but outspoken, Bernie successfully negotiated with officials at all levels of government on behalf of Indians and other minorities, crossing into political territory normally off-limits to his people.

Bernie Whitebear’s story takes readers from an impoverished youth—including a rare account of life on the Colville Reservation during the 1930s—to the “Red Power” movement as it traces Bernie’s emergence as an activist influenced by contemporaries such as Bob Satiacum, Vine DeLoria, and Joe Delacruz. By choosing this course, Bernie was clearly making a break with his past, but with an eye toward a better future, whether staging the successful protest at Fort Lawton or acting on behalf of Native fishing rights in Puget Sound. When he died in July 2000, Bernie Whitebear had left an inestimable legacy, accomplishing things that no other Indian seemed able to do. His biography is an inspiring story for readers at many levels, an account of how one American Indian overcame hardships and obstacles to make a difference in the lives of his people—and an entire community.
AUTHOR BIOGRAPHY
Lawney L. Reyes, brother of Bernie Whitebear, is an award-winning artist and the author of White Grizzly Bear’s Legacy. He lives in Seattle.
REVIEWS
"Reyes' tribute to his brother is uplifting and informative, offering a firsthand view of the progress of Indian rights during the last half of the twentieth century." —Booklist“Blends biography with Native American insights as it tells of a man who began as an impoverished you on a 1930s reservation and grew to a powwow organizer whose influence improved the lives of Indians across the country.” —Midwest Book Review“A loving tribute to Seattle’s most-admired Indian activist.”—Sunday Seattle Times & Seattle Post Intelligencer