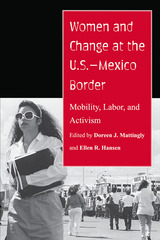 There’s no denying that the U.S.–Mexico border region has changed in the past twenty years. With the emergence of the North American Free Trade Agreement (NAFTA), the curtailment of welfare programs, and more aggressive efforts by the United States to seal the border against undocumented migrants, the prospect of seeking a livelihood—particularly for women—has become more tenuous in the twenty-first century. In the face of the ironic juxtaposition of free trade and limited mobility, this book takes a new look at women on both sides of the border to portray them as active participants in the changing structures of life, often engaging in political struggles. The contributions—including several chapters by Mexican as well as U.S. scholars—examine environmental and socioeconomic conditions on the border as they shape and are shaped by both daily life at the local level and the global economy. The contributors focus on issues related to migration, both short- and long-term; empowerment, especially reflecting shifts in women’s consciousness in the workplace; and political and social activism in border communities. The chapters consider a broad range of topics, such as the changing gender composition of the maquiladora work force over the past decade and border women’s non-governmental organizations and political activism. In most of the studies, both sides of the border are considered to provide insights into differences created by an international boundary and similarities produced by cross-border interactions. Together, these chapters show the border region to be a dynamic social, economic, cultural, and political context in which women face both obstacles and opportunities for change—and make clear the vital role that women play in shaping the border region and their own lives. This collection builds on Susan Tiano and Vicki Ruiz’s groundbreaking volume Women on the U.S.–Mexico Border by continuing to show the human face of changes wrought by manufacturing and militarization. By illustrating the current state of social science research on gender and women’s lives in the region, it offers fresh perspectives on the material reality of women’s daily lives in this culturally and historically rich region.
TABLE OF CONTENTS