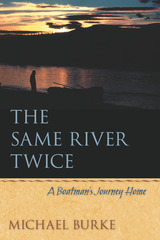 The Same River Twice: A Boatman's Journey Home
by Michael Burke
University of Arizona Press, 2006
Paper: 978-0-8165-2531-7
In the summer of 1991 Michael Burke, an experienced river guide, embarks on a three-week journey down a series of remote rivers in British Columbia. Leaving behind his pregnant wife, he embraces the perils of a voyage with a companion he barely knows in a raft that may not weather the trip. He attempts to reconcile the shifting fates of his life—his transition from river guide to husband, father, and academic. At the same time, he hopes to explore his connection to a distant relative, Sid Barrington, who was a champion “swiftwater pilot of the North” in the late 19th and early 20th centuries.

As Burke contemplates what he and Sid may have had in common, he meditates on the changing meaning of rivers, and the impossibility of fully recovering the past. In clear and graceful prose, Burke blends Sid’s colorful history with his own uncommon journey. He also reflects upon the quick currents of time and the fierce passion he shares with Sid for the life of river running in Alaska and the west. Unlike most river-running books that often describe waterways in the lower forty-eight states, The Same River Twice introduces readers to rough, austere, and unfamiliar rivers in the northern wilderness. Burke has an intimate understanding of these remote, free-flowing rivers. He effectively captures the thrill of moving water, the spirit of rivers and river canyons, and the life of river guides. This insightful memoir brings readers into a confluence of rivers, where past and present merge, revealing the power of wilderness and the truth about changing course.
TABLE OF CONTENTS