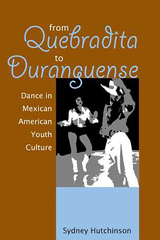 From Quebradita to Duranguense: Dance in Mexican American Youth Culture
by Sydney Hutchinson
University of Arizona Press, 2007
Paper: 978-0-8165-2536-2
Salsa and merengue are now so popular that they are household words for Americans of all ethnic backgrounds. Recent media attention is helping other Caribbean music styles like bachata to attain a similar status. Yet popular Mexican American dances remain unknown and invisible to most non-Latinos. Quebradita, meaning “little break,” is a modern Mexican American dance style that became hugely popular in Los Angeles and across the southwestern United States during the early to mid 1990s. Over the decade of its popularity, this dance craze offered insights into the social and cultural experience of Mexican American youth. Accompanied by banda, an energetic brass band music style, quebradita is recognizable by its western clothing, hat tricks, and daring flips. The dance’s combination of Mexican, Anglo, and African American influences represented a new sensibility that appealed to thousands of young people. Hutchinson argues that, though short-lived, the dance filled political and sociocultural functions, emerging as it did in response to the anti-immigrant and English-only legislation that was then being enacted in California. Her fieldwork and interviews yield rich personal testimony as to the inner workings of the quebradita’s aesthetic development and social significance. The emergence of pasito duranguense, a related yet distinct style originating in Chicago, marks the evolution of the Mexican American youth dance scene. Like the quebradita before it, pasito duranguense has picked up the task of demonstrating the relevance of regional Mexican music and dance within the U.S. context.
TABLE OF CONTENTS