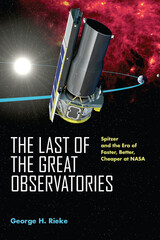 The Spitzer Space Observatory, originally known as the Space Infrared Telescope Facility (SIRTF), is the last of the four “Great Observatories”, which also include the Hubble Space Telescope, the Chandra X-ray Observatory, and the Compton Gamma Ray Observatory. Developed over twenty years and dubbed the “Infrared Hubble", Spitzer was launched in the summer of 2003 and has since contributed significantly to our understanding of the universe.

George Rieke played a key role in Spitzer and now relates the story of how that observatory was built and launched into space. Telling the story of this single mission within the context of NASA space science over two turbulent decades, he describes how, after a tortuous political trail to approval, Spitzer was started at the peak of NASA’s experiment with streamlining and downsizing its mission development process, termed “faster better cheaper.” Up to its official start and even afterward, Spitzer was significant not merely in terms of its scientific value but because it stood at the center of major changes in space science policy and politics. Through interviews with many of the project participants, Rieke reconstructs the political and managerial process by which space missions are conceived, approved, and developed. He reveals that by the time Spitzer had been completed, a number of mission failures had undermined faith in “faster-better-cheaper” and a more conservative approach was imposed. Rieke examines in detail the premises behind “faster better cheaper,” their strengths and weaknesses, and their ultimate impact within the context of NASA’s continuing search for the best way to build future missions.

Rieke’s participant’s perspective takes readers inside Congress and NASA to trace the progress of missions prior to the excitement of the launch, revealing the enormously complex and often disheartening political process that needs to be negotiated. He also shares some of the new observations and discoveries made by Spitzer in just its first year of operation. As the only book devoted to the Spitzer mission, The Last of the Great Observatories is a story at the nexus of politics and science, shedding new light on both spheres as it contemplates the future of mankind’s exploration of the universe.
AUTHOR BIOGRAPHY
George H. Rieke is Regents’ Professor of astronomy and planetary science at the University of Arizona and author of The Detection of Light.
TABLE OF CONTENTS